The JPA, or the Java Persistence API, is a special specification which defines how different Java objects or classes access and interact with the data in a Java database. It is one of the many approaches to ORM (Object to Relational Mapping), but now it is accepted as the most standard approach in Java. The term ORM actually refers to the process of mapping, which can be either done with the Java objects, or with database tables. JPA cannot be used on its own, as it is simply a Java specification. To actually use these specifications or interfaces, a proper implementation must be done. There are many different implementations which are free and open-source.

JPA also needs a Java database in order to map the objects. JPA can persist and map a large variety of objects, including Plain Old Java Objects (POJO). It doesn’t even need any particular method or interface for different classes of objects, unlike its predecessor EJB 2 CMP, which required additional methods for object classes. Using JPA, the mappings of objects are easily defined either by simple annotations, or by creating an entity using XML. This allows the object to be properly mapped in relation to database. JPA even has different APIs for these definitions, like the EntityManager API for managing XML entities, which are queries running alongside the database. JPL also has a special query language for querying the objects.


Why we need JPA?

There are many different types of approaches available to the user for mapping Java objects in relational databases, for example JDO, EJB 2 (the predecessor of JPA), object databases and of course, serialization. So, why do we need another such API at all? This is because most of these frameworks have many different problems. JPA, on the other hand, is made by adopting all the advantages of these specifications and merging them to a separate API which doesn’t require any of them. Some of the disadvantages of these APIs are given below.

JPA adopts and even builds upon all these features of different specifications, and also negates their limitations. It is compatible with different types of databases, has a lot of security options, promotes data integrity and has implementations which support both enterprise editions and standard editions of Java.


Implementing JPA – What are the components?

There are many different components of JPA. In object relational mapping, the main part is the mapping orm.xml file. ORM allows the conversion of data type from object to relational or the converse. It binds the data for an object to the object itself.

ORM consists of the interaction of three phases. The first phase, also called the Object data phase, has many different types of classes and service interfaces. It consists of the main business logics and components.

The second phase is known as the persistence phase where the main components interacting are Object Grid, orm.xml mapping file and the main JPA provider.

The architecture of JPA consists of different components like EntityManagerFactory, EntityManager, Entity objects, orm.xml file and persistence units. The JPA architecture is based completely upon the Java programming framework, which includes both the EE and SE environments of Java. Also, the architecture includes a query language known as JPQL.

Some of the components are given below:

To configure the environment following are the steps to be followed

Now your environment is ready to write JPA classes in Java. In the next section we will create some sample applications.

In this example we will create a sample JPA application in Eclipse IDE. First create a JPA project as shown in the screen shot below. 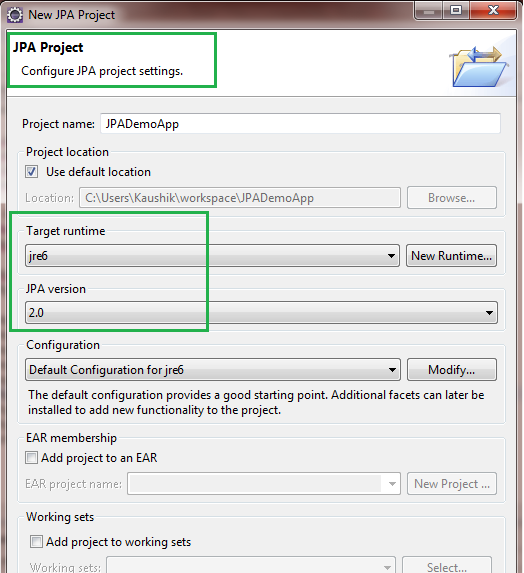 Now, Download the Eclipselink as shown in the screen shot below. This is required for the JPA APIs in the project. 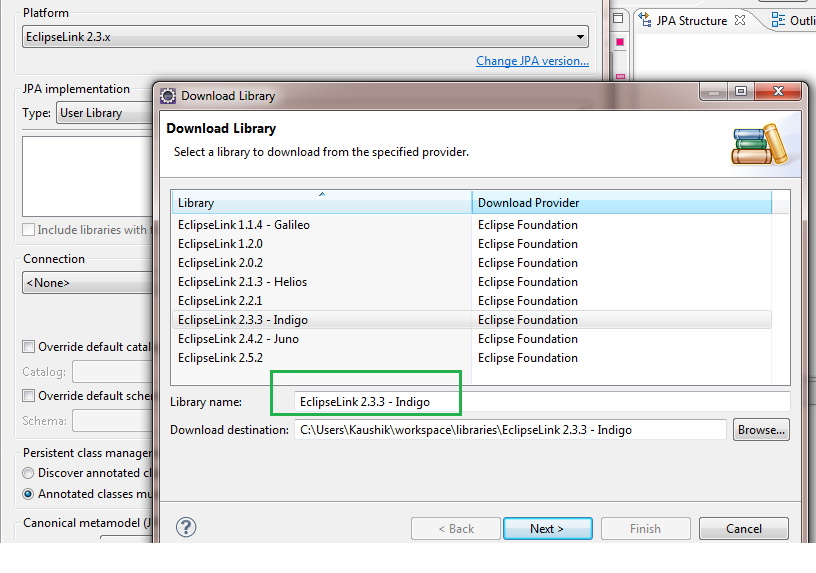 Listing 1: This is the class to create an Employee object

Listing 2: This is the class to update an Employee object


Listing 3: This is the Employee object class

Listing 4: This is the persistence XML for mapping

JPA is one of the best APIs for Java development. While there are many approaches to persistence programming, this one is considered as the best by most of the developers due to its great reliability and improvements offered over other specifications. The implementation part is also easier to learn. In this tutorial, we have tried to explain all the details in simple steps. Hope it will help the developers to implement JPA easily.