The newest version of Java 8 SE has held the world by storm. It boasts of its new programming capabilities and features. Overall, it claims that it actually could decrease the work of its users and enhance the quality of coding greatly. However, in order to understand about its features, one must first know about generics. Often, a situation arises in Java which requires you to check what values you are actually adding to your ArrayList and Collections and also want specific objects in your ArrayList. You may then use the Generics function of Java. Generics also allow the user to check whether the Comparator used for sorting the objects is compatible or not. This function is a compile type function, so it only runs while compiling the code, akin to C++ templates.

In this article, we will know more about the importance of generics and will learn how to handle them.


Why generics are important?

Generics are very important in the sense that they allow the types of objects to define the class of objects. Thus, generics can be used to re-use codes without any risk of exceptions. Generic code has a lot of benefits over non-generic ones. They help in faster coding and after deployment there is a lot lesser chance of bugs and exceptions occurring in the Java application. Some of the benefits of using generics in Java are given below.

Must read – Interesting articles on Java

Java has some collection classes, for example ArrayList, HashMap and TreeList. These classes contain objects of the same type, also called generic objects. Earlier, before the implementation of generics, any kind of objects could have been kept in a class and the compiler would not warn about the type of the objects. However, Java 1.5 introduced casting, which means that the type of the objects had to be defined in order to prevent loopholes in the Virtual Machine, which were susceptible to exploitation maliciously.

Generics were truly implemented in JDK 5. It means that a generic class contains objects of only one type. This meant that casting was no longer required and the whole code was written according to a specific type which is explained to the compiler while compiling the program. In this way, generics work in Java 5 and beyond.

To configure the environment following are the steps to be followed

Now your environment is ready to write generic classes in Java. In the next section we will create some sample applications.

In this example, we will write a generic class which will take integer and string input. And then it will print the output.

The output will be as shown in the screen shot below. 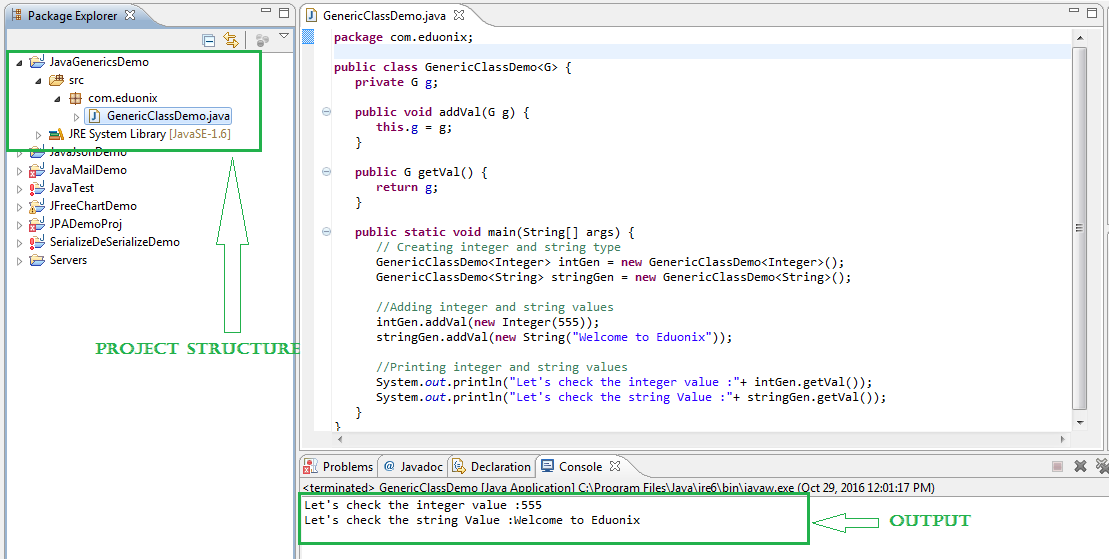 Generic is a very important part of Java. Today, many features which are a staple in Java are usable because of this single mechanism. It allows faster and more efficient coding and also negates loopholes and security issues. While this article talks about the fundamental areas of generics, generics can be understood in a much better way if the developer actually practices coding.