Data Science And R – Why R is important?

R is actually a programming environment and language made specifically for graphical applications and statistical computations. It is licensed under the GNU license, just like the S language, which is developed by the Bell Laboratories. It is very similar to S, though implemented in a different manner. Because of this, some programs written in S language can also be run in R’s environment, without much alteration.

Some background of R:

R is a language and software environment which was made by Robert Gentleman and Ross Ihaka from the University of Auckland in New Zealand. It is used in various fields of work like for analysis of statistical information, their graphical representation and their reporting. It is being further developed by the R Development Core Team. R is free under the GNU General Public License and its precompiled binary code is available for download. It also supports many operating systems like Windows, Linux and MacOS.

The name of this programming language originates from the initials of the first name of both its creators, which is R. Also, its name can be considered as a play on the name of the S language, which was created by the Bell Laboratories.

R was made in the year 1990s when programming languages like Redmonk, Tlobe and PyPL were popular. It is an alternate implementation of the S language, as already stated. R is an important tool for machine learning and statistics, along with numerical analysis.

R is a very unique language and has some really interesting features which aren’t present in other languages. These features are very important for data science applications. Some of these features are explained below:

R is a vector language. Unlike other languages, R can do many things at once. You can add functions to a single vector without putting it in a loop. This feature of R makes it more powerful and faster than other languages.

As R is an interpreted language, you can run your code without any compiler. In other programming languages like Java or C, a compiler is required to make out the instructions from your code before running it. However, R directly interprets the code into a full-fledged program. This makes development of the code easier.

R was designed for statistical studies, and proved excellent in its field of work. However, as the power of R is being realised, it is finding use in a variety of other places, starting from financial studies to genetics and biology and medicine. This is because R is a Turing-complete language, which means that every task can be programmed in R.


Why R is important for data science professionals?

R is also perfect for exploration. It can be used in any kind of analysis work, as it has many tools and is very extensible too. It is also a perfect fit for big data solutions.

Following are some of the high lights which show why R is important for data science.

So, most of the development of R language is done by keeping data science and statistics in mind. As a result, R is become the default choice for data science applications and data science professionals.

R can be downloaded from the following link.

For windows, you can run the (.exe) file and accept the default settings. After installation, open R-GUI/R console for running R programs.

For Linux, binaries are available for different flavour. You can use yum command to install R.

In this section we will try to explore some data science applications by using R language. It will focus more on the data and coding part. We will also use statistical functions and visualization methods of R to show the results clearly.

In the first example, we will explore the visualization part of R by using a pie chart. Let us consider some data of four cities as shown below. And we want to plot a pie chart based on these data. This data can be coming from any statistical analysis on these four cities. In this example, we are creating a set of data, assigning it to a variable and then plotting the pie chart.

# Let us prepare the data for the pie chart.

Now, after execution of the code, the output will be displayed as shown below. 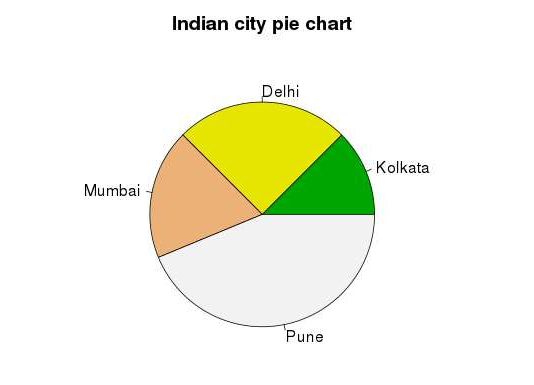 In this second example, we will talk about linear regression analysis which is widely used in data science applications. The two most important variables are ‘predictor’ and ‘response’. Value of a predictor is collected from experiments and this is the data to be used in analysis. The value of response is the output derived from the predictor data.

The general equation of linear regression is shown below

We will take an example of an e-commerce portal, where the profit percentage depends upon the units of sales per month.

# Values of units of sales in an e-commerce portal

Listing 2: Predicting the value of profit % from sales figure

The output would be as shown below.

Now, let us plot the chart for the above example.

Output of the above code would be displayed as shown below.

Everything has its pros and cons, and the cons of this language are its speed and memory management issues. Though a lot of progress has been made in filling up these loopholes completely, they still pop up frequently.

Along with this, there hadn’t been much interactivity in the language’s environment. So, other languages must come in to fill this loophole, for example JavaScript. The initial programming may be done in R, but the results must be shown in JavaScript for more interactivity.

It is also used for weather forecasting by National Weather Service. Google is also among thousands of its users, using it for various tasks like e-commerce. Orbitz uses this language for dynamic suggestion of hotels to its customers.

R was extremely popular when it was first released back in the 1990s, and its popularity is growing with time as statistics is becoming more and more important every day. It has many features that make it really powerful. Also, it is free open-source software which is being developed for ironing out the few creases it may have. Not only this, R is finding use in a variety of fields due to its features. In data science, however, it is the best language for use.